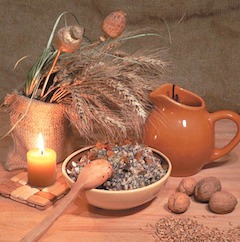 Ukrainian families are celebrating Christmas today, extending the holiday season for a large portion of the population.

The celebrations began Friday, when traditional Christmas Eve dinner (Sviata Vecheria) was served in a 12-dish meal to honour the 12 apostles spreading food for the soul throughout the world. You wouldn’t have found any meat or dairy products on the table — a symbol to show respect for the animals.

Ukrainians celebrate Christmas based on the Julian calendar, about two weeks later than celebrations outlined in the Georgian calendar.

You’ll often hear the words “Khrystos rodyvsia” during the season, which translates to “Christ is born” as the traditional greeting.

“Christmas on January 7 is a centuries old tradition based on the old Julian Calendar that is celebrated by both Ukrainian Orthodox and Catholic Churches,” said Paul Grod, Ukrainian Canadian Congress national president. “We wish our Orthodox and Eastern-rite Catholic brethren all the best during this Christmas season.”