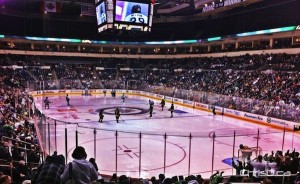 Trailing 1-0 after 20 minutes on a goal from Clarkson’s Julien Cayer of Longueuil, Quebec, the Sioux’s Carter Rowney of Sexsmith, Alberta potted a pair in the second — including the game winner — to give UND the lead headed into the third.

The Canadian talent is thick on UND’s roster, including a handful of Manitoba-born skaters. 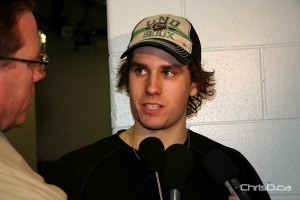 O’Donnell was drafted by the Tampa Bay Lightning in the 6th round (156th overall) in the 2010 NHL entry draft.

“I saw my first UND game when I was about 10 years old. Once I saw that, it’s always been a dream of mine. When they came recruiting, it was an easy decision.”

One of the advantages to playing US college hockey is the ability for young players to gain an education while playing at an elite level.

“Getting an education is a big part of life,” added the 19-year-old centreman. “Having that in your back pocket once hockey is done is huge.”