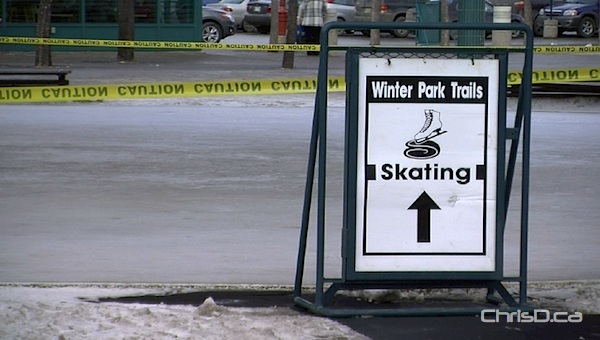 Caution tape blocks off the canopy skating rink at The Forks due to melting ice caused by above seasonal temperatures. (CHRISD.CA)

WINNIPEG — Southern Manitoba will be faced with a wintery reality Wednesday as this current mild spell comes to an end.

After more than a month of above seasonal temperatures, Winnipeg is in store for a harsh change as Environment Canada is predicting a high of only -19°C tomorrow. It’s such a change from the high of 6°C forecast for today that the weather office has noted it as an abnormal temperature trend.

Along with the cold snap, snow and blowing snow is also in the cards, with wind gusts getting up to 60 km/h by later in the day. When you factor in the wind chill, it’ll feel more like -31°C.

The not-so-nice news is likely welcome to businesses that rely on colder weather during the winter months to offer recreational activities. The Forks was forced to shut down its outdoor skating rinks and trails inside Arctic Glacier Winter Park late last week and again on Monday.

“Oh Mother Nature, you fickle beast. Skating rinks and trails are closed for repairs…again,” The Forks said in a disappointed tweet posted on Monday.

The cooler air will stick around for several days before a brief reprieve on the weekend with a high on Saturday of -4°C, followed up by -5°C on Sunday. Keep in mind that a long range forecast such as that will likely change, but hopefully not for the worst.

In the meantime, dust off that winter wear you forgot you had and prepare for a few days of bitter cold. After all, it’s January 10. You know this weather love fest had to end some time.