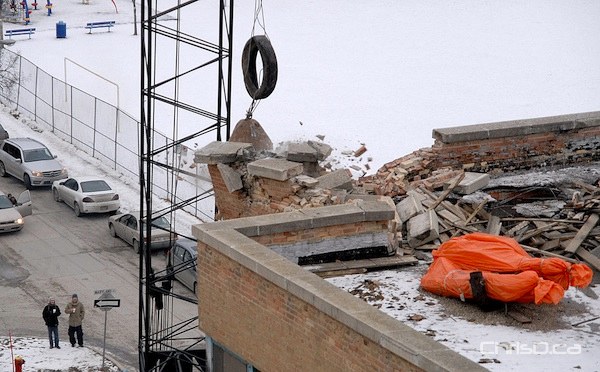 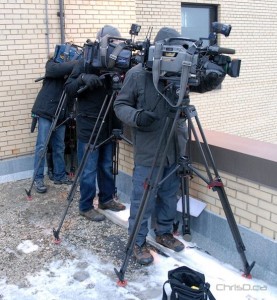 Media gather to shoot the demolition of the Maryland South building on Wednesday. (STAN MILOSEVIC / MANITOBAPHOTOS.COM)

Demolitions don’t usually go off without a hitch, and in the case of a Maryland Street building Wednesday morning, it was anything but a smooth operation.

The Maryland South building was set to be demolished at 8:30 a.m. to make way for a new two-storey health complex near the Misericordia Health Centre. At about 9:40 a.m., a 5,000-pound wrecking ball held by a 75-ton crane came loose off its wiring and dropped into the building below. The demolition was halted as crews went in after the ball to reattach it to the crane.

With no time frame on when the operation would resume and blistery winds kicking up, media perched on the roof of the nearby Cornish building began to dismantle.

Watch video highlights of the demolition:

The majority of materials from the teardown will be recycled after the walls were set to collapse inwards.

Misericordia Health Centre will build a $43 million facility to replace the Maryland building, which was originally constructed in phases beginning in 1906.

Time-lapse photography of the redevelopment project is available online.