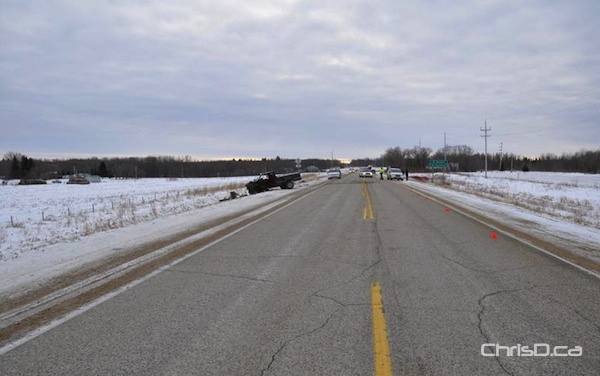 A head-on crash on Highway 10 near Pine River closed the roadway for about two hours while police investigated on Thursday, January 12, 2012. (RCMP HANDOUT)

A two-vehicle collision Thursday morning in the RM of Mountain sent a Mafeking, Manitoba man to hospital with serious injuries.

The crash happened just before 10 a.m. on Highway 1, one kilometre north of Pine River, when a northbound 1992 Ford Ranger pickup truck collided head-on with a southbound semi truck after crossing the centre line.

The 51-year-old Austin man driving the semi was not injured in the crash. The 50-year-old male driver of the pickup truck was taken to Winnipeg by the STARS Air Ambulance with serious, undetermined injuries. Two nurses and several other civilians stopped to provide first aid to the victim.

Road conditions were good at the time of the collision, say RCMP, and alcohol, seat belt use and speed are not considered factors.