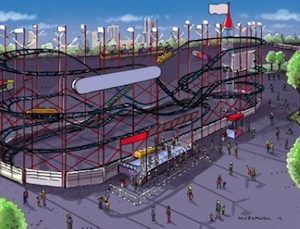 An artist's rendering of the unnamed roller coaster to make its Canadian debut at the Red River Ex. (HANDOUT)

A new roller coaster that will make its Canadian debut at this year’s Red River Exhibition needs a name.

North American Midway Entertainment is turning to the public to put a name on the 10,000-square-foot ride, which can get up to 50 km/h as it flies over 1,099 feet of track. It will be the largest travelling roller coaster in the country.

The attraction’s first Canadian stop will be in Winnipeg this summer before travelling to the Capital Ex in Edmonton and the Canadian National Exhibition in Toronto.

The person who submits the winning name will receive a four-day trip to the fair of their choice, including round-trip airfare for two, ground transportation, accommodation and tickets to the fair for two full days. Submissions will be accepted until January 20 at RedRiverEx.com or NameThatCoaster.com. The winner will be announced on January 25, 2012.