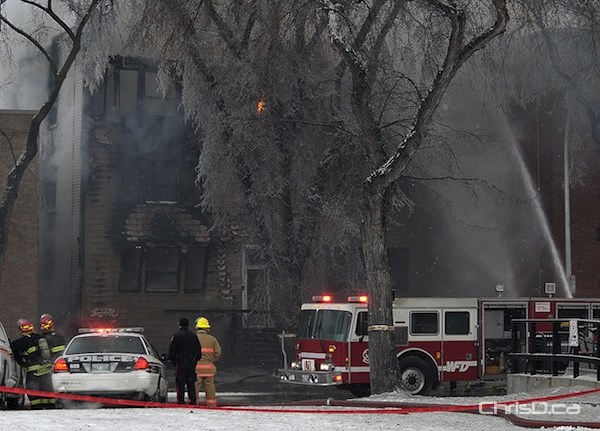 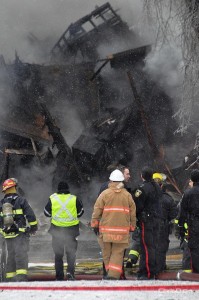 Firefighters and police watch as a Sherbrook Street apartment collapses after a fire on Saturday. (MAURICE BRUNEAU / CHRISD.CA)

WINNIPEG — Between forty and fifty residents were evacuated after a fire tore through a Sherbrook Street apartment block early Saturday, completely destroying the building.

Firefighters responded to the apartment in the 500 block of Sherbrook Street shortly after 7 a.m.

The blaze sent 19 people to hospital, including two in unstable condition, who were later upgraded to stable. Several others were treated for smoke inhalation.

Flames could be seen engulfing several floors of the multi-storey complex, located between Ellice Avenue and Sargent Avenue. Traffic in the area was blocked off for several hours.

The fire also sent at least one firefighter to hospital.

The cause of the fire is under investigation by the Arson Strike Force. Damage is estimated at $600,000. 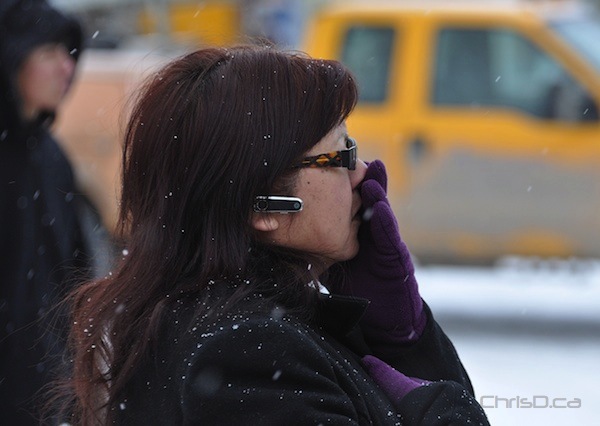 Firefighters and police watch as a Sherbrook Street apartment collapses after a fire on Saturday. (MAURICE BRUNEAU / CHRISD.CA)

UPDATE: Sunday, January 15 — Damage is now pegged at $1 million. Police have arrested and charged two men and a male youth with two counts of arson each. They remain custody.