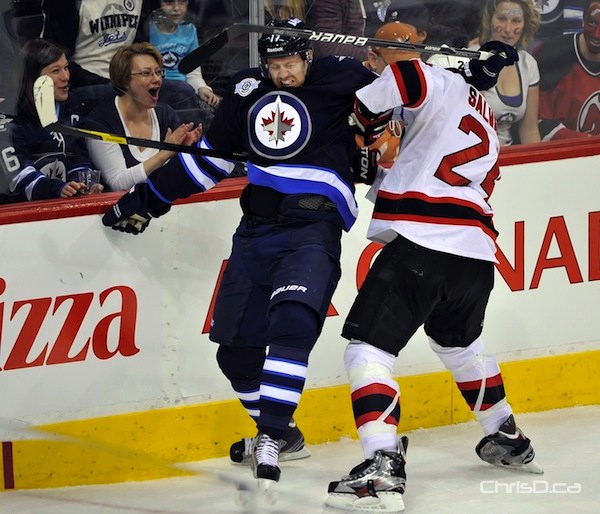 WINNIPEG — The Winnipeg Jets failed to exorcise the demons that have come on as of late, falling 2-1 to the New Jersey Devils at MTS Centre Saturday afternoon.

Saturday’s loss is Winnipeg’s second third period collapse in their last three games, with the non-collapse being an anemic outing — a 2-0 shutout at the hands of the Sharks at home on Thursday. They remain in second-last among NHL clubs in third-period scoring differential (-23) from being outscored 50-27 in 44 games this season.

“We’re there — just a tad bit off the mark as far as finishing it off,” said Winnipeg defenceman Ron Hainsey, who has seen a spike in ice-time with the absence of injured fellow blue-liners Zach Bogosian and 2011-2012 All-Star Dustin Byfuglien. “It’s not a huge, huge gap here.”

“The third period was a situation where they got a couple of opportunities and capitalized,” said Jets head coach Claude Noel. “Their second one, we read the play in front of the net and missed it by three or four inches and it went right to their guy on the tape and ended up in our net.”

Noel speaks of the game winner, where New Jersey’s Peter Sykora intended to feed fellow Czech-born veteran Patrick Elias with a one-timer at the top of the circle. However, instead of taking a clearly open shot, Elias let the puck pass through his legs to 19-year-old standout rookie Adam Larsson on the opposite point. Larsson slap-passed it right back to Elias who deflected it into a gaping cage behind Winnipeg netminder Ondrej Pavelec.

It’s a highlight reel marker that will likely appear in several “Plays of the Week” segments.

“(It was) obviously the heads up play by Larsson on the winning goal,” said New Jersey head coach Peter DeBoer when asked what made the difference for his team. “What a play. For Larsson to have the vision to go back to him there — that’s why he’s a special player.”

In close games like Saturday’s, a highlight-reel goal often proves to be the difference.

But the loss keeps the Jets’ struggles in the forefront of Winnipegger’s minds despite playing much better in many facets of their game. Among them; face-offs, where Winnipeg, who has been atrocious in the circle all season, won 70 per cent of their draws against New Jersey.

Gamenote: In the second period, Jets forward Blake Wheeler took a puck to the throat area. Following the game, Jets officials confirmed that Wheeler was taken directly to hospital where tests for serious injury came back negative. He will be re-assessed in the coming days.