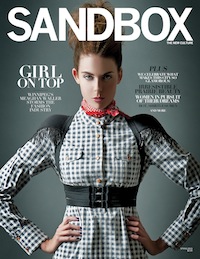 A locally-produced fashion and lifestyle magazine will cease operations after printing its first issue just over two years ago.

SANDBOX Magazine promoted the best fashion, lifestyle and culture happenings in Winnipeg and began as an online-only publication. It transformed into a psychical product in 2010, printing seven quarterly issues and holding five release parties during its lifespan.

“SANDBOX has given us all an outlet to foster the sentiment that lead us to launch the magazine in the first place: Winnipeg is truly amazing,” said editor-and-chief Jeffrey Vallis, also one of the co-founders with Braden Alexander.

Most recently, SANDBOX took home the Western Magazine Award for “Best New Magazine,” not to mention winning the accolades of those in the business, from local designers and singers, to restauranteurs and fashion industry insiders.

The final issue will go on sale Monday, January 30 at McNally Robinson Booksellers. The last SANDBOX party will be held on Saturday, January 28 at the Winnipeg Art Gallery. Tickets are $10 and are available at Red River Mercantile, U of W Info Booth, Answers at the U of M, Rhymes with Orange, and Hush.