WINNIPEG — CAA Manitoba has a goal of getting more drivers behind the wheel of an environmentally-friendly vehicle. And to do so, the auto club has launched the Get Current campaign. 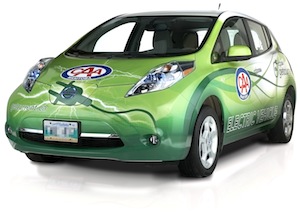 One of two vehicles CAA Manitoba is testing is the Nissan Leaf. (HANDOUT)

The education campaign aims to inform Manitobans on the benefits to driving an electric vehicle, whether it be to save their wallet from the gouge at the gas pump, or to help reduce Greenhouse gas emissions. Most surprising? They’re said to hold up to brutally cold Manitoba winters.

“Electric vehicles are here to stay, but very few people know much about them — especially when it comes to the many benefits and challenges that come with them,” said CAA spokesperson Liz Peters.

“From how much it actually costs to run an electric vehicle to how far one can travel on a single charge, at CAA, we’ve made it our mission to become a knowledgeable source of information on all things electric car related, so we can pass it on to motorists.”

Electric vehicles start at around $32,000 to purchase, providing for minimal passenger and storage space depending on the model you select. The battery itself is valued at $10,000, creating a hefty expense when it comes to replacing it.

“We’re hoping the batteries will cost less and the entire cost of the vehicle will be less as well. If we want more people to be driving these cars, we need to make them achievable and economical for any kind of Manitoba to be able to drive them,” Peters added.

When it comes to keeping the wheels in motion, the number of charging stations around the province can be a deterrent. There are only a handful in Manitoba, making it difficult for the owner of an electric vehicle to consider taking a long road trip.

“Right now it’s an infrastructure problem. Most people would be charging just with a regular plug in their wall.”

Level 3 charging is the kind of system that can fully charge a battery in about 20 minutes, but so far there isn’t one available in Manitoba. CAA offers its own free Level 2 charging station to the public, which takes about 7-8 hours to produce a full battery charge. On the far end is the Level 1 plug — taking about 20 hours to fully charge a battery.

GetCurrent.ca provides more information about electric vehicle technology, and locations of where CAA will be holding public roadshows to show off the vehicles. Their current fleet includes a Nissan Leaf and a Mitsubishi MiEV.