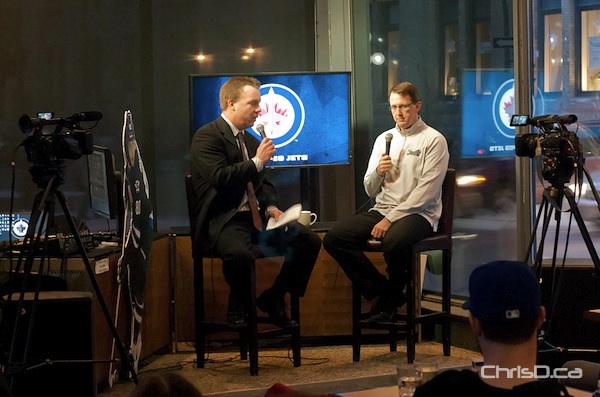 The most well-liked man in the city to sports fans touched on a number of topics, including what it was like to get the Winnipeg Jets organization up and running on May 31, 2011.

“A year ago we were getting ready,” Chipman said when asked to reflect on what he was doing at this time last year. “December 31 (2010) was an important milestone along the way, and we had an agreement that if the situation in Phoenix wasn’t resolved by the 31st of December, then we would probably have an opportunity to acquire it (NHL franchise).”

The Jets had 125 staffers the day the team was announced, and another 50 were hired in the next 80 days.

“We had to get some of those people here. A lot of them were spread out … they’re scouts and they’re in St. Johns and so forth. It was overwhelming.”

View the photo gallery below of Chipman’s interview on Monday.

Chipman said the team has put franchise history on the back burner for the time being, alluding to an arena whiteout and retro jersey many fans have been asking about.

“We’ll do those things, but let’s not sacrifice getting up and running. We joke about the troughs, but we have issues to work out. I came into this business for my passion of the Jets in the first place. There will be a time and a place when we will pull those things together.”

Asked by an audience member about the “True North” shout out during the national anthem honouring the company behind the Jets, True North Sports and Entertainment, Chipman said, “It doesn’t get old. When I’m listening to the anthem, it is unbelievable. It’s so humbling. It’s one of those things … every time hair stands up on my arms when I hear it.”