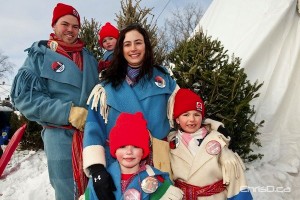 Hé ho! Festival du Voyageur is less than a month away and organizers are ready for another year of great entertainment, delicious food and an all-around good time.

Programming for the 43rd edition of the festival was revealed Tuesday, promising more than 235 shows on various stages throughout the city, and accounting for over 300 hours of music. Franco-Manitoban acts Daniel Roa, Fire & Smoke, Oh My Darling, marijosée and more are scheduled to perform.

The festival will begin with the traditional Torch Light Walk on February 17, departing from The Forks at 6 p.m. and proceeding to Voyageur Park. At 7:30 p.m., the new outdoor opening celebration will include music, dance and fire.

Of course, the majority of events will be held at Voyageur Park inside Fort Gibraltar. Children can play in a winter playground and snow maze, enjoy winter slides, sleigh rides, and voyageur adventures.

Ten-day Voyageur Passes are on sale now at all Safeway stores across Winnipeg. The adult pass is available for $22 and the youth pass (six to 17-years-old) is $7. The pass will no longer be a button, but a new practical format similar to the passes used at ski resorts. For those who are still looking to purchase a button, souvenir buttons will be available at Festival du Voyageur for $1.

The festival will run until February 26.

← Previous: Even with the Sun, Forecast Today is No Picnic Next: Three People Injured in Crash Near Portage →
Tags: Festival du Voyageur