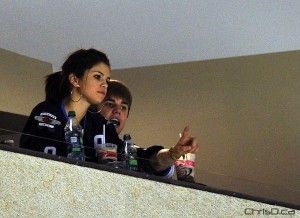 The Manitoba Museum is hoping signed memorabilia from a visit by Justin Bieber and Selena Gomez last fall will benefit its Nonsuch Conservation Project.

The Biebs and his girlfriend were in Winnipeg last October, where they not only visited the museum, but took in a Winnipeg Jets game and other sights. The pair had dinner on the Nonsuch replica ship in the heart of the museum, and later signed a black Nonsuch T-shirt to be raffled off.

“They are a very lovely young couple and were very appreciative of our efforts to make their date at the museum special,” said Manitoba Museum CEO Claudette Leclerc.

Now the public has a shot at owning the shirt, with all proceeds going towards repairs needed on the 17th century replica ketch.

Tickets for the raffle are $5 and can be ordered at MBMuseumFundraising.com until 5 p.m. CT on Sunday, April 8. Tickets can also be purchased at 190 Rupert Avenue during regular business hours.

← Previous: Corus Entertainment Hiring New General Manager Next: Even with the Sun, Forecast Today is No Picnic →
Tags: Manitoba Museum