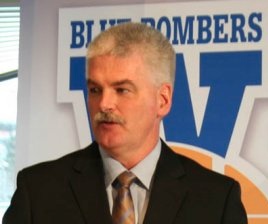 Jim Bell has been named the vice-president and chief operating officer of the Winnipeg Blue Bombers, the football club announced Thursday.

The position takes effect immediately, adding to Bell’s prior experience as the club’s president over the past two years.

Bell will continue to oversee the club’s day-to-day operations while working alongside president and CEO Garth Buchko. He’ll also be involved in the transition from Canad Inns Stadium to Investors Group Field at the University of Manitoba.

Bell has been with the Blue Bombers since 2002 when he was hired as director of finance before being promoted to VP of finance and administration in 2006. He was named interim president in December 2009 and took over the job permanently in February 2010.