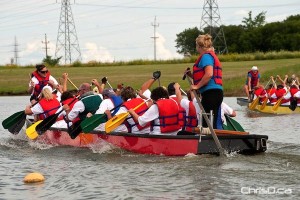 Winnipeg’s rivers aren’t in any condition for rowers, but the River City Dragon Boat Festival has launched already in support of healthcare, research and technology at the Health Sciences Centre.

The HSC Foundation and the Manitoba Paddling Association launched the third annual event during a news conference Wednesday, setting the stage for the event taking place June 8-9.

The festival consists of three races, which include two heats and one playoff race where 18-metre long boats outfitted with teams of 16-20 paddlers plus a steerperson and a drummer race against each other in a straight line of approximately 500 metres.

Discounted advanced entry registration is now open at RiverCityDragonBoat.com until January 31. Registration continues through the spring and early summer.