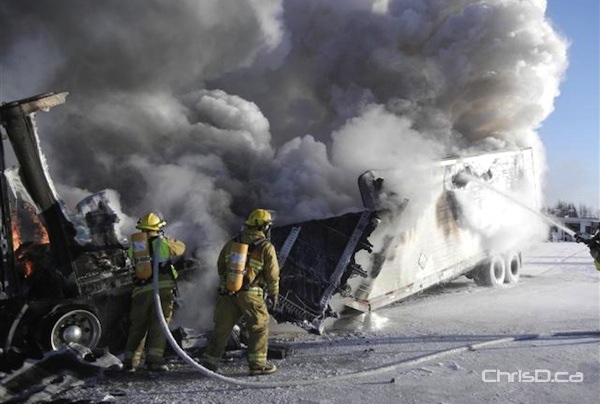 Firefighters extinguished a blaze inside a semi-trailer truck on the Trans-Canada Highway in the RM of Reynolds on Thursday, January 19, 2012. (FALCON BEACH RCMP) 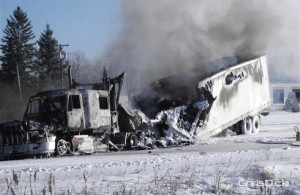 A semi-trailer truck sits damaged after a fire destroyed it near McMunn, Manitoba on Thursday. (FALCON BEACH RCMP)

A semi-trailer truck burst into flames on the Trans-Canada Highway Thursday morning near McMunn, Manitoba.

The fire was reported shortly after 8 a.m. when the driver of the rig noticed a possible mechanical malfunction. The truck pulled off the highway into a parking lot where attempts were made to extinguish it.

A 35-year-old man and 33-year-old man from Ontario were travelling westbound in the truck at the time of the fire. Neither of the two were injured.

The truck was transporting general freight with no hazardous materials inside.

No damage estimate is available, but the vehicle is considered a total loss.