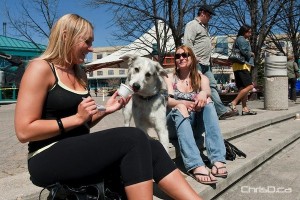 A pair of friends enjoy a warm spring day at The Forks in this May 2011 file photo. (TED GRANT / CHRISD.CA)

The Forks has been named Canada’s Best Public Space by the Canadian Institute of Planners (CIP) in the first annual Great Places in Canada contest.

The downtown Winnipeg meeting place is a popular year-round tourist destination, making it one of the most busiest places in the city.

Six-thousand nominations helped crown The Forks with the award, as people from across the country voted for their favourite location.

“This award means a great deal to us and really showcases that the original vision of The Forks as a meeting place has been achieved,” said Jim August, chief executive officer of The Forks. “And to be recognized by planners, as well as the public, really means that we have developed this site with integrity.”

A plaque commemorating the win was unveiled at The Forks earlier today.