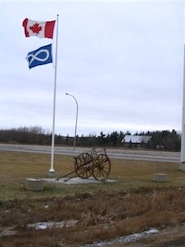 RCMP are investigating after a historic landmark was vandalized in Lorette, Manitoba.

The vandalism to the Dawson Trail Red River Cart occurred overnight on January 10 outside the local Co-op store.