Canadian Paralympian and spinal cord injury activist Rick Hansen was in Winnipeg Friday, part of a three-day stop in the city to celebrate the 25th anniversary of his Man in Motion World Tour. 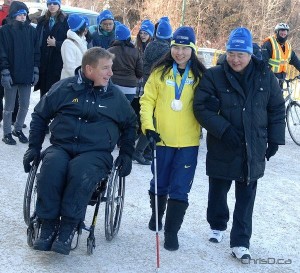 Hansen’s first official stop of the day was at the Manitoba Legislature, where he met with Manitoba’s Lieutenant Governor Philip Lee and his daughter, Maggie Lee Grant. Hansen also joined students from Daniel McIntyre Collegiate and R.B. Russell Vocational High School, who are part of the Lieutenant Governor’s Youth Experience Program.

The cross-country relay is celebrating “Difference Makers” in every community it makes a stop in, including Winnipeg’s Hannah Taylor, the then-eight-year-old who founded the Ladybug Foundation in 2004.

The day’s relay ended at The Forks, where Hansen was joined by Mayor Sam Katz and Premier Greg Selinger indoors. Outside events, such as a previously planned sledge hockey demonstration, were cancelled due to cold weather.

On Saturday, Hansen will be at the Health Sciences Centre in the morning before travelling to Headingley to join medal-bearer Glenn Reimer — a member of the Headingley Fire Department who has raised more than $80,000 to benefit children with disabilities.