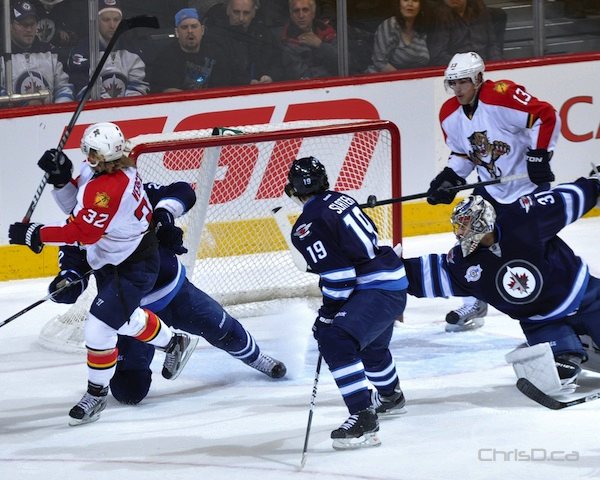 The Florida Panthers put their first goal of the night into the Winnipeg Jets' net at MTS Centre on Saturday, January 21, 2012. The Panthers won 4-3 in a shootout. (MAURICE BRUNEAU / CHRISD.CA) 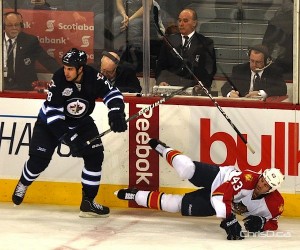 WINNIPEG — A four-point game is what they call a matchup between two teams that are close in a playoff race. But when the game goes to overtime — like Saturday’s between the Winnipeg Jets and Florida Panthers — it suddenly becomes a three-point game. A tough outcome for the team trailing in the standings.

The 4-3 shootout victory for the Panthers (22-15-10) will give them a pair of points in the Southeast Division standings, while Winnipeg (22-21-2) will gain a single for forcing extra time.

Winnipeg remains third in the division with 50 points, while Florida’s 54 pulls them ahead of Washington (52) and into first place. 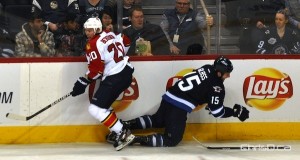 “It’s a big point for us obviously,” said Jets defenceman Zach Bogosian in his first game back after missing five with an undisclosed lower-body injury. “We would’ve liked the two points better, but hopefully the one pays off for us.”

Winnipeg completely outplayed the Panthers for 65 minutes, dominating in nearly every significant statistical category including shots on net (44-23, a season high), hits (38-16), and faceoffs won (41-27).

Florida did have an advantage in one stat line; blocked shots, by a margin of 24-7, further demonstrating how overwhelmed they were in their own zone the entire game.

However, there is one key area that critically hurt the Jets on Saturday — turnovers — and at key times.

“The fact that we gave them three free goals — I thought that was really disappointing,” said Jets bench boss Claude Noel. “We had clear possession of the puck three times in our (defensive) zone with really not a lot of pressure, and we served up three pizzas that ended up in our net.”

A mere 57-seconds after Jets forward Nik Antropov netted his second of the game to tie things up at two early in the second period, Kris Versteeg put Florida ahead when he found his second goal of the game on the end of a missed Toby Enstrom outlet pass.

“We still battled back to make it 3-3 (on a Alex Burmistrov goal with 6:15 remaining in regulation) so for us, we’re not going to beat ourselves up,” added Noel.

Antropov’s two-goal night gives him eight markers on the season and five points (3G, 2A) in his last three games.

But when asked about his improved play as of late, the 12-year veteran kept his team’s objectives in mind.

“As I said, it’s one point and we were looking for two points. Unfortunately we didn’t get it, so the job wasn’t done.”

“Obviously it’s a big win against these guys,” said Panthers goaltender Scott Clemmensen on the heals of his impressive 41 save outing. “Throw all the stats out the window. (It) was a gutsy win for us.”

The Jets have their work cut out for them if they want to keep pace in the Southeast. They play 10 of their next 11 away from home, hoping to improve on their suspect 7-12-4 road record.