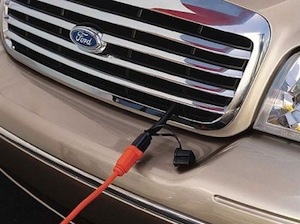 Manitoba Public Insurance is warning vehicle owners to be weary when it comes to worn extension cords and plugs.

Several dozen vehicle fires are reported each winter in the province, which are caused by faulty extension cords or corroded block heater plugs. Such defects can result in “electrical arching,” which can quickly spark a fire.

According to figures released by MPI, about 1,000 vehicles are damaged by fire in Manitoba each year. The majority of those fires take place in winter.

“Many vehicle owners should take a few seconds to also inspect the block heater plug,” said Clem Cormier of MPI. “If the plug in is broken, or has obvious corrosion, it should be replaced immediately.”

The public auto insurer has the following tips: