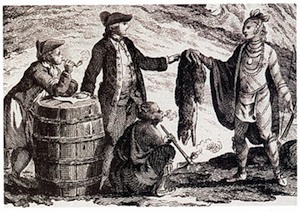 Canadian fur traders deal their goods in this 1777 photo. (WIKIPEDIA)

An exhibit on Canada’s fur trade will open to the public on Thursday at CFB Shilo.

“Profit and Ambition: The Canadian Fur Trade, 1779-1821” is being put on by the Canadian Museum of Civilization and will open at the RCA Museum at 7 p.m.

The event will also kick off the 50th anniversary of the museum, followed by a fireworks display at 7:45 p.m.

The exhibit will feature trade goods, including muskets, jewellery and original North West Company documents such as voyageur contracts. Many of the artifacts on display date back to the late 1700s.

Th exhibit will run until April 13.