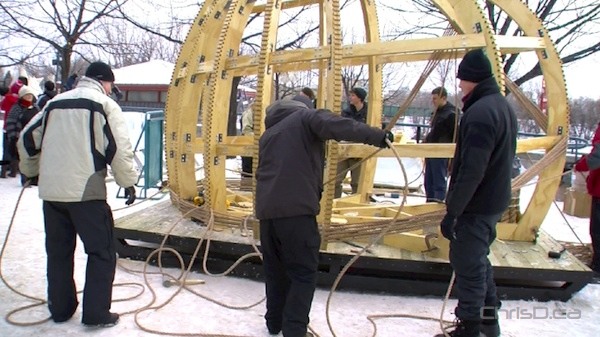 A team from New York, NY works on their warming hut called "Rope Pavilion" at The Forks on Thursday, January 26, 2012. (CHRISD.CA) 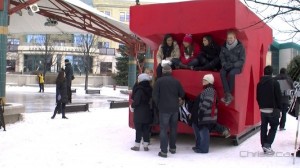 Students from the University of Manitoba pose next to their warming hut called "Hothut" at The Forks on Thursday. (CHRISD.CA)

Once Mother Nature decides to unleash its chilly wrath again, five new warming huts at The Forks will definitely come in handy.

The teams began crafting their masterpieces Thursday as part of An Art+ Architecture Competition on Ice, where groups from around the world will work on their creations meant to keep outdoor enthusiasts out of the elements.

“The creativity and genius behind this year’s huts are something everyone should come down and see,” said Paul Jordan, chief operating officer of The Forks. “It’s one thing to put these thoughts down on paper, but to see it come together on site is another thing all together.”

One of the draws this year is a design by renowned architect Frank Gehry. Los Angeles-based Gehry International, Inc. submitted a design called Five-Hole, which is formed out of chiseled ice blocks stacked and composed in a sculpturally casual way. Frank’s son, Sam, is representing the sculpture during the competition.

The Mjölk Team from the Czech Republic has also made the journey to Winnipeg to construct their design called Ice Pillows. Other entrees include Rope Pavilion by Kevin Erickson and Allison Warren from New York, NY, Wind Catcher by Tina Soli and Luca Roncoroni from Norway, and a homegrown entry from the Faculty of Architecture at the University of Manitoba called Hothut.

More than 140 entries were received for the annual competition, which were later narrowed down to just five. The huts will be spread out throughout The Forks property for the public to enjoy.