Care Home Cat Being Forced Out of Current Digs 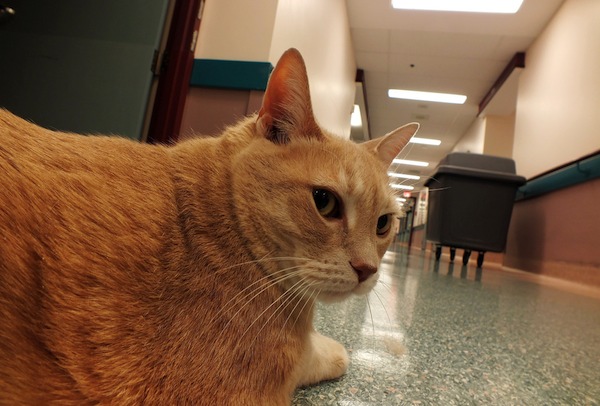 An orange tabby cat who has lived at the Riverview Health Centre for the last several years is in need of a new home.

Toby has been cared for by staff in one of the palliative care units and was the feline companion for one of the residents, named Ruth, until she passed away in 2010.

Toby remained at the centre for the next few years until a change in management decided he needed to go. Now faced with finding him a new home is DJ Beattie, an employee of the centre who has cared for the feline for the last three years.

“I am not in a position to take in another cat at this time, and I have asked everyone I can think of if they can help out with this situation,” Beattie said.

“Myself and some of the other staff are trying to at least get him into a no-kill shelter, no luck so far. This cat has served as an unofficial “therapy animal” for many years, and I don’t think he deserves to go out like this.”

UPDATE: Toby has been adopted by a staff member at the centre.

← Previous: Another Mild Day as the Weekend Arrives Next: Winnipeg Soap Maker Going to the Oscars →
Tags: Animals