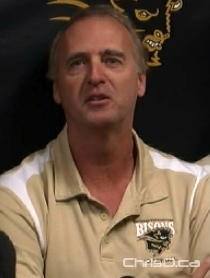 “I like the way we did it at home in Manitoba,” Pischke said in a statement following the game. “We beat the best team in the country by playing flawless tonight. It was a battle against Trinity and we have to be prepared again on Saturday. I might even be around for my 1,300th.”

Pischke’s milestone is the most overall coaching wins by a CIS (Canadian Interuniversity Sport) head coach in history.

The Bisons and Spartans will have a rematch tonight beginning at 8 p.m. The women will play first at 6 p.m.

← Previous: Folk Festival Presents 'The Once' on March 20 Next: Education Students Sought Out by Hiring Professionals →
Tags: University of Manitoba | Volleyball