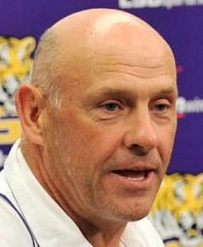 The Winnipeg Blue Bombers have named one of the NCAA’s top offensive coaches as their new offensive coordinator.

Gary Crowton comes to Winnipeg most recently from the University of Maryland where he held the same role, along with years of experience as a head coach, QB coach and passing game coordinator.

“I am extremely excited to have Gary join the Blue Bombers coaching staff,” head coach Paul LaPolice said on Monday. “Having known each other since my days coaching at the University of New Hampshire, I was always impressed with him as a person and especially as an offensive innovator. His experiences in the spread offense are very similar to type of offenses that are prevalent in the CFL. He will be a great teacher for our players and his expertise at the NCAA level will be especially valuable for our younger roster.”

In 1999, Crowton was hired as the offensive coordinator of the Chicago Bears where he served for two years. In his first season, the offense ranked number three in the NFL in passing yards (258.5 per game) and established a franchise record 4,136 passing yards behind a trio of quarterbacks.