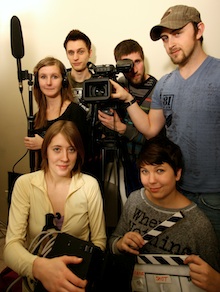 Films will be accepted until April 9 in the 10th Annual Student Film Festival. (UNIVERSITY OF WINNIPEG)

Student filmmakers with a knack for talent behind the lens are being encouraged to submit their work to the 10th Annual University of Winnipeg Student Film Festival.

The festival will give students an opportunity to have their work juried by a panel of local filmmakers, their films screened before a public audience and members of the local filmmaking community.

“Every year the quality of the films being produced by today’s student filmmakers continues to impress me,” said UWinnipeg film professor John Kozak. “These student films are often innovative, exhibit a high level of craftsmanship, and are very entertaining.”

The festival is open to all post-secondary students enrolled from April 2011 to April 2012.

There is no entry free and submissions must be accepted by Monday, April 9, 2012 at 4 p.m. CT. The festival will run April 25-27 at Eckhardt-Gramatté Hall at the U of W.

Submission forms are available on campus at the UWSA Info Booth (Main Floor, Centennial Hall), the office of the Department of Theatre and Film (Room 3T03), or online. Visit theatre.uwinnipeg.ca/filmfest.htm for further details and to enter.