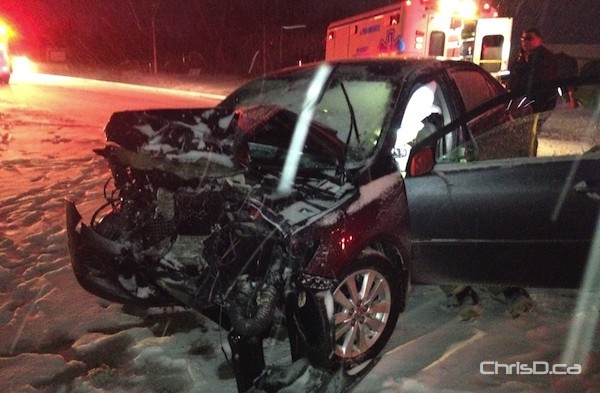 A Toyota sedan was mangled after this head-on crash on Highway 9A Monday, January 30, 2012. (SELKIRK RCMP)

Manitoba RCMP were kept busy Monday night, responding to two separate crashes within 90 minutes of each other.

The first happened just before 6 p.m. on Highway 9A near the junction of Highway 4 in Selkirk. RCMP say a 2009 Toyota sedan travelling southbound collided head-on with a northbound 2009 Chevrolet pickup truck.

Road conditions at the time were reported to be slippery with reduced visibility.

In the second crash, Stonewall RCMP responded to a four-vehicle collision on Highway 6 just north of Warren at about 7:30 p.m.

Two pickup trucks, a minivan and a semi truck were involved in the crash, which witnesses say occurred when the southbound travelling van lost control. The van collided with a northbound pickup truck, which then hit the second truck. The semi avoided the collision, but ended up in the ditch.

Investigators had the highway closed for about three hours while the scene was cleared.

Two of the five people involved were taken to hospital with undetermined injuries.

Road conditions were also reported to be slippery with reduced visibility at the time of the crash.