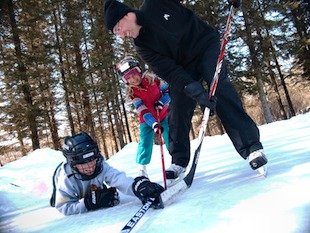 Riding Mountain National Park will be the place for hockey enthusiasts from February 10-12, as the park and neighbouring communities celebrate Hockey Day in Canada.

There will be skating on Clear Lake, hay rides in the town site, the Valentine’s skate at the Wasagaming rink, and a hockey skills competition at the Elkhorn Resort.

Ski waxing clinics will be held by Parks Canada, along with a guided evening ski, a winter camping demonstration, and snow shoeing programs.

Both rinks in Wasagaming will host public skating, shinny, and learn to skate programs, including the ice surface on Clear Lake.

The Elkhorn Resort will act as headquarters for any sports fan not wanting to miss big league action, while the resort will screen NHL Sports Centre, showing all seven Canadian teams playing in honour of Hockey Day in Canada.

To see a complete list of weekend events, visit ParksCanada.gc.ca/riding.