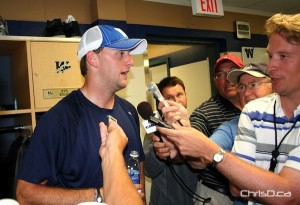 Quarterback Joey Elliott will return for the Winnipeg Blue Bombers this year after being re-signed on Wednesday.

The 25-year-old Indiana native was scheduled to become a free agent on February 16.

“Joey is an athletic quarterback with great potential in this league,” said vice-president and general manager Joe Mack. “He is a young, enthusiastic player, who is a great team guy and has the leadership qualities you look for in a quarterback.”

Elliott began last season as the second-string quarterback on the depth chart but suffered a torn ACL in his only appearance in week three against the Calgary Stampeders and missed the remainder of the season. He played in four games over two seasons with the Blue Bombers, including two starts in 2010, and has completed 45 of 91 passes for 522 yards and two touchdowns.