Mild Earthquake Recorded on the Prairies 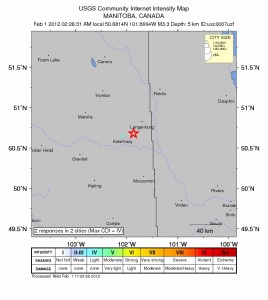 Data shows the exact location where the earthquake was recorded on Wednesday, February 1, 2012. Click to enlarge. (USGS)

People living in Western Manitoba may have felt a slight tremor after a minor earthquake in Saskatchewan early Wednesday morning. The quake originated 16 kilometres east of Esterhazy, Saskatchewan, and about 346 kilometres west of Winnipeg near the provincial border.

The United States Geological Survey says a 3.3 magnitude earthquake occurred at 2:26 a.m. The area has noted minor quakes in the past, but nothing severe.

An earthquake with a 3.3 magnitude isn’t considered large enough to do any damage, but can be felt if you happen to be located near the epicentre.

Chris Rutkowski of the University of Manitoba said the quake could have been caused by potash mining in Saskatchewan.