Local Magazine Lives on in Partnership with Downtown BIZ 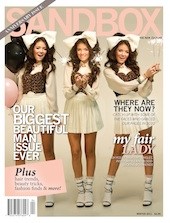 A popular Winnipeg fashion and lifestyle magazine, that announced it would be shutting down after two years, will live on after all.

“Sandbox is an absolute local treasure for our downtown and our city and we’re thrilled that we can help keep its creative voice alive and strong,” said Stefano Grande, executive director of the BIZ. “We look forward to this being the first of many collaborations with the Sandbox team.”

The magazine will print 40,000 copies and be distributed throughout the downtown and city in May. SANDBOX’s final issue is now on sale at McNally Robinson Booksellers in Grant Park Shopping Centre.