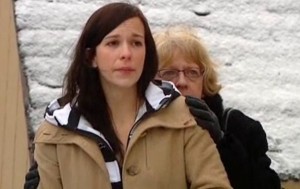 Jenny Prest watches as firefighters put out the blaze at her condo at 817 St. Paul Avenue on December 28, 2011. (CBC MANITOBA)

A social is being planned for a young Winnipeg woman who lost everything in a devastating fire on December 28, 2011.

Jenny Prest was renting a condo from her brother on St. Paul Avenue when the building caught fire in the early morning hours, resulting in about 20 people suddenly becoming homeless.

Unfortunately for Prest, she didn’t have tenant’s insurance and is having to start her life over from scratch. Now family, friends and her co-workers at Joey Polo Park have come together to throw a social in Prest’s benefit.