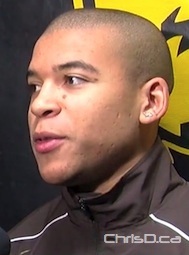 The 19-year-old University of Manitoba athlete was part of International Federation of American Football (IFAF) World Team, which defeated the U.S. Under-19 National Team by 35-29 on Wednesday.

“We’ve been working so hard for this all week, and it paid off with the victory,” Coombs said in a statement. “People don’t think anyone can play outside of the United States. This is going to make the U.S. take this event more seriously, and it’s also going to inspire tons of little kids around the world. It feels great that we did this.”

Bison Evan Gill, 19, played at the defensive end position for the World Team.

A replay of the game will air Saturday online.