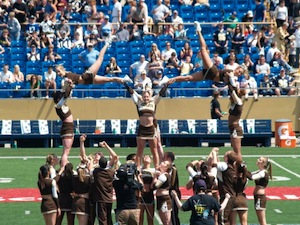 U of M Bisons Cheerleaders (BISONSCHEER.COM)

The University of Manitoba Bisons cheerleading team will be flipping, flying and performing their aerobatic tricks on Sunday.

Stunt Evolution is an annual fundraiser for the team, allowing them to compete outside of the province at various competitions. Cheer squads of all ages will take part to show off their moves in several categories, including basket toss skills, tumbling, partner stunting, quad competition and lib holding.

Stunt Evolution VI will be held at the Investors Group Athletic Centre on the U of M’s Fort Garry campus beginning at 2:30 p.m. Admission is $10 at the door or $8 in advance from any Bison cheerleader.