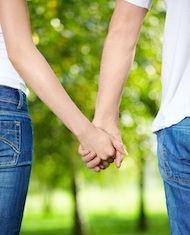 Kingston, Ontario has been named the most romantic city in Canada. Winnipeg placed 14th. (STOCK PHOTO)

The majority of romantics reside in Ontario. That is if you go by the ranking Amazon.ca published on Tuesday.

The online retailer released its third annual list of the Top 20 Most Romantic Cities in Canada leading up to Valentine’s Day.

The list was tabulated by comparing sales data of romance novels, sex and relationship books, romantic comedy DVDs and Michael Bublé CDs since January 1, 2012, on a per capita basis in cities with over 80,000 residents.

Amazon says residents of Kingston are most likely to curl up on the couch with both a “Rom-Com” and a Danielle Steel novel than in any other Canadian city.

Most Romantic Cities in Canada: