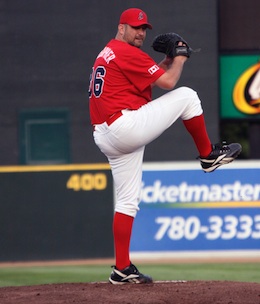 Pulsipher made six starts for the Goldeyes late in the 2009 season, going 4-2 with a 3.35 ERA. The 38-year-old was selected by the New York Mets in the second round (66th overall) in the 1991 MLB amateur draft. During his career, he also played with the Milwaukee Brewers, Boston Red Sox, Chicago White Sox, and finally the St. Louis Cardinals where he ended his Major League stint in 2005.

“He’s a huge addition to our organization and to say I am thrilled is an understatement,” manager Rick Forney said. “He has a lot to offer to young pitchers in our organization. I know he’s really excited about coming and starting this chapter of his life. He’s moved on from playing and he’s looking forward to starting his career fresh as a pitching coach.”