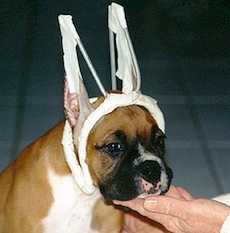 A Boxer puppy whose ears have been cropped. (EXAMINER.COM)

Veterinarians in Manitoba are no longer allowed to perform ear cropping surgeries on canines for cosmetic purposes.

Bylaw 31 was passed by the Manitoba Veterinary Medical Association (MVMA) on February 3, stating, “No member shall perform cosmetic ear cropping on a canine for the purpose of having the animal’s appearance conform to a breed standard or tradition.”

The surgery is usually performed on puppies three-months-old and involves removing both skin and a cartilage core to reshape a dog’s ears. The MVMA says the procedure is unnecessary in the canine species, causing pain and distress to the patient without any medical benefit.

Veterinarians who choose to continue ear cropping would be investigated for breaching the bylaw, then receive a letter of reprimand or termination of their veterinary license if found to be guilty. Fines for performing the surgery could range from $5,000 for a first offense to $30,000 for a second offence to an amateur who attempted to perform the surgery on their own dog.