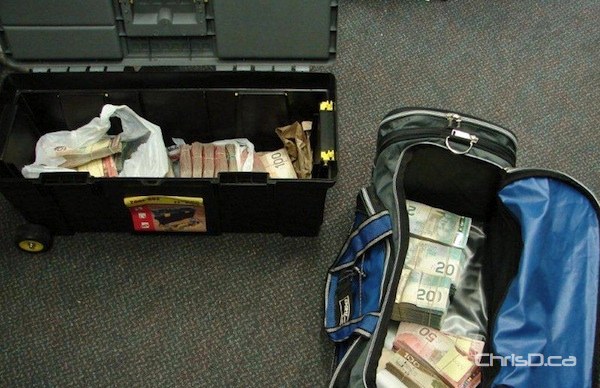 RCMP seized nearly $420,000 in cash from a home in the RM of Rosser during a search on February 2, 2012. Three people face numerous charges relating to contraband cigarettes. (RCMP HANDOUT) 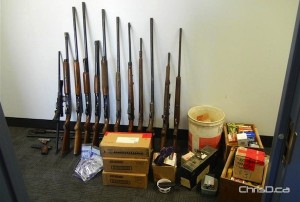 Some of the firearms seized from two homes in the RM of Rosser. (RCMP HANDOUT)

RCMP have seized more than one million illegal cigarettes and hundreds of thousands of dollars in cash after a bust in the RM of Rosser.

On February 2, police searched two residences in the rural municipality northwest of Winnipeg, where they located 1.45 million contraband cigarettes, $418,203 in Canadian currency and $5,208 in U.S. currency. Three long guns and two loaded handguns were also seized.

Two men, aged 66 and 67, were arrested at the scene. A 48-year-old woman has also been arrested. All three residents of the RM of Rosser face provincial charges of non-Manitoba marked tobacco under the Manitoba Tobacco Tax Act and the Tax Administration and Miscellaneous Taxes Act. The approximate taxes avoided on the cigarettes is $326,250. If convicted, a fine of $978,750 could be issued.

The 67-year-old has since been released from custody and faces numerous weapons charges. The 66-year-old was released on a promise to appear.

Manitoba Finance and the RCMP continue to investigate.