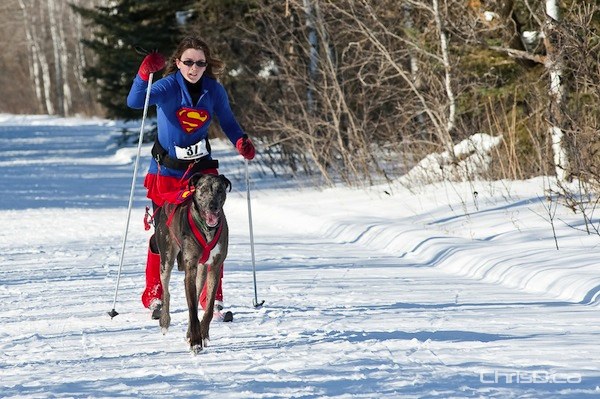 A woman is pulled on skies by a dog during a skijoring race, part of the 2011 Snow Motion Classic at Birds Hill Provincial Park on Sunday, February 13, 2011. (TED GRANT / CHRISD.CA FILE)

Skijoring and kick sledding teams will race on Sunday at Birds Hill Provincial Park as part of the 5th annual Snow Motion Classic.

Forty-five teams are registered for the event, which will see humans and their hounds race on skis and kick sleds.

“We’re happy to have the local contingent entering the Classic, along with racers from British Columbia, Saskatchewan and northwestern Ontario,” said race director Susie Strachan. “Skijoring Pro classes will be especially exciting to watch as those teams are expected to run very fast times around the five-kilometre trail.”

For those unfamiliar with the sport, skijoring is when a person skate skis behind one or two dogs. A kick sled is a small Finnish-made sled originally intended for human power, which can be adapted to be pulled by one or more dogs. The faster the human can ski or run, the faster their dogs can go.