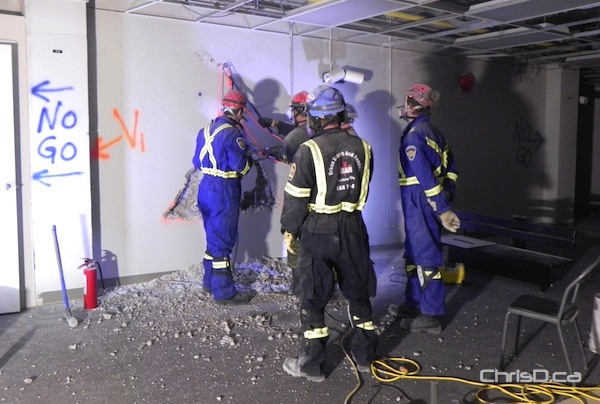 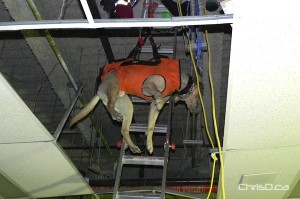 A Manitoba Urban Search and Rescue dog is lowered into position to find survivors as part of a mock exercise on Friday. (GOVERNMENT OF MANITOBA)

“The USAR team is constantly working to keep their skills sharp and the chance to put them to the test in a large-scale operation will pay huge dividends in the event of a real emergency,” said Family Services and Labour Minister Jennifer Howard. “The OFC (Office of the Fire Commissioner) organizes these exercises on a regular basis to keep the team up to date on skills and the latest practices so they are ready to be called into action at any time.”

The former airport terminal will be demolished and will become the exercise area, where the team will train for any and all emergency scenarios. The exercise is designed to be as realistic as possible, with volunteers called in from around the province. K-9 dog teams and specialized search equipment like cameras and listening devices have been put to the test as the team trains to locate trapped and buried people in a simulated rubble pile.

All-season tents have been in place to house the USAR team, and water and galley supplies have been brought in. The camp also features an environmentally-friendly power system, computer-aided search tools and satellite communications systems.