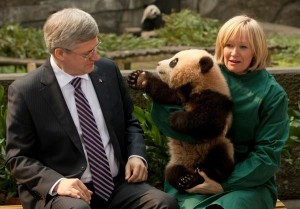 Two giant panda bears from China will thrill visitors to the Toronto and Calgary zoos over the next 10 years.

Prime Minister Stephen Harper announced over the weekend while in Chongqing, China that the bears Er Shun and Ji Li will be splitting their time between the two Canadian zoos as part of an agreement with Chinese agencies.

“The pandas, which will delight Canadian children and adults alike, and be a boon to tourism in Toronto and Calgary, will be an enduring reminder of the deep friendship and goodwill that exists between our countries,” Harper said.

Each zoo will invest $1 million annually in research and conservation of the species as part of the agreement.

Canadians haven’t had the unique pandas on home soil for more than 20 years. The bears are expected to arrive in Toronto early next year before being transferred to Calgary in 2018.