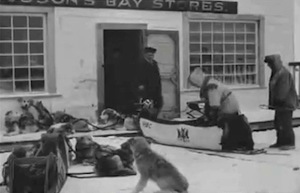 A screen grab from a Hudson's Bay Company film in 1920. (VISIONS OF THE NORTH)

WINNIPEG — A rare film collection documenting the history of the Hudson’s Bay Company will be screened for the public later this month.

The black-and-white silent films have returned from England and were unveiled Monday at the Manitoba Archives Building in Winnipeg. The films were donated and will now be a permanent part of HBC’s Archives in the city.

“These extraordinary films bring to life records already held at the Hudson’s Bay Company Archives and help create a more complete picture of HBC’s long history in the Canadian North,” said Culture, Heritage and Tourism Minister Flor Marcelino. “The motion pictures provide a unique glimpse into Inuit and First Nations communities and HBC operations across northern Canada from 1919 to 1939.”

The two-hour silent film called “Romance of the Far Fur Country” was commissioned in 1920 by the Hudson’s Bay Company to celebrate its 250th anniversary. It originally premiere in May 1920 in Winnipeg’s Allen Theatre, known today as the Metropolitan, and was also shown in movie theatres across Western Canada.

Footage from aboard the Nascopie HBC supply ship is also part of the collection, documenting its voyage from Montreal to the eastern Arctic and Hudson’s Bay, as well as footage of company pageants and parades in Winnipeg, Calgary, Victoria and Vancouver.

The films have been preserved up until now in the British Film Institute National Archive in London. All 40 reels have been digitized and copies will soon be available for researchers, film makers and anyone interested in Canadian history.

Screenings of a selection of the footage will take place on three consecutive Wednesday evenings, February 15 at 7 p.m. at Cinematheque, 100 Arthur Street and February 22 and February 29 at 7 p.m. at the Archives of Manitoba, 200 Vaughan Street.