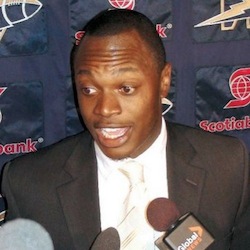 Howell spent last season as the Bombers’ defensive and special teams assistant before taking over coaching the linebackers after coach Richard Harris passed away in July.

“Markus did a great job in his first year as a coach in the CFL and was a great addition to our coaching staff,” said head coach Paul LaPolice. “He is a receiver through and through and will be able to bring a lot of experience to our young group of pass catchers.”

“I really enjoyed coaching last year and am excited to be able to coach the receivers next season,” Howell said in a release. “Even though I played on both offence and defence in my playing days, I’m a receiver at heart and can’t wait to get to work on helping out on the offensive side of the ball.”

Howell has a lengthy career in the CFL, having spent 11 years in the league between Winnipeg, Calgary and Ottawa.