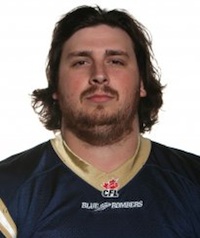 “We are very happy to have Glenn back in the fold for next season,” vice-president and general manager Joe Mack said in a release. “Coming off a serious injury to being named a Divisional All-Star is something to be proud of and we’re very happy we were able to keep another member of our offensive line in tact.”

The import started every game at right tackle for the Blue Bombers last season and was named an East Division All-Star just a year after missing the entire 2010 campaign with a torn pectoral muscle. He has played in 65 regular season games in his five seasons with Winnipeg, Saskatchewan and Toronto. January has also played in three playoff games along with last year’s Grey Cup championship.