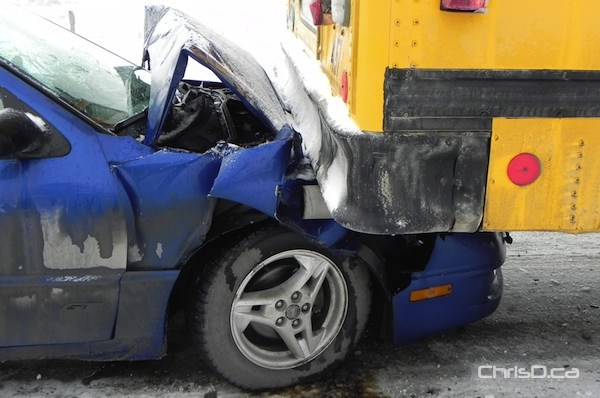 A Pontiac Sunfire rear-ended a school bus on Highway 210 on Thursday, February 16, 2012. It was just one of many crashes RCMP responded to. (ST. PIERRE JOLY RCMP PHOTO)

The few centimetres of snow that fell on southern Manitoba overnight created slippery road conditions for motorists on Thursday.

Manitoba RCMP responded to several highway crashes all before 9 a.m., including a two-vehicle accident involving a school bus.

The crash happened on Highway 210 at about 8:30 a.m. 1.5 kilometres east of St. Adolphe. A school bus was stopped with its lights flashing when it was struck from behind by a sedan. Six children were on the bus at the time and two were about to board.

The driver and lone occupant of the sedan has been charged under the Highway Traffic Act. No injuries were reported.