Despite the mild temperatures and lack of real snow, organizers have pulled together to overcome the seasonal challenges. Man-made snow was acquired from Adrenaline Adventures in Headingley, which provided Festival du Voyageur with piles of fresh powder to create some of its signature attractions at Voyageur Park. The Snow Sculpting Symposium, snow maze and toboggan run all received a boost that winter didn’t provide for this year.

“We expected (to spend) as much as $20,000 to do these snow pieces,” said Emili Bellefleur, director of marketing and communications for Festival du Voyageur. “We finally just ended up spending about $11,000.” 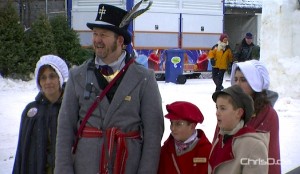 The St-Vincent-Gagnon family was chosen as ambassadors for Festival du Voyageur for a two-year mandate. Daniel, his wife Jocelyne and their children Katia, Miguel and Cabrel will act as spokespersons of the festival and represent the joie de vivre of the voyageur at community events, nursing homes, and elementary schools. (CHRISD.CA)

The tents at Voyageur Park have been rearranged to increase capacity and accommodate more visitors this year. Bellefleur says the warm temperatures will likely bring more people through the gates.

“Hopefully the mild weather sticks around. We’re hoping that a lot of people will come out if the weather stays nice. That will recoup some of the fees involved with making snow.”

An annual snow-making budget is put aside every year to deal with whatever Mother Nature should decide to throw at organizers.

“This year was a little bit more expensive, but it’s nothing that we can’t balance out.”

The festival will begin with the traditional Torch Light Walk leaving from The Forks at 6 p.m. and ending at Voyageur Park at 7:30 p.m. An opening celebration at the park will include music, dance and fire. 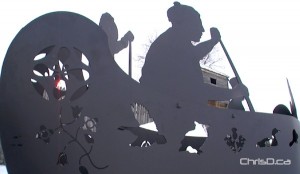 Programming for the 43rd edition of the festival includes local band Sons of York, who will perform one week from today on February 24 in the Rivière-Rouge Tent. More than 235 shows will be performed on various stages throughout the city, and accounting for over 300 hours of music. Franco-Manitoban acts Daniel Roa, Fire & Smoke, Oh My Darling, marijosée and more are all part of the lineup.

If all the outdoor fun and entertainment works up your appetite, the festival certainly doesn’t have a food shortage. Traditional food items like maple-flavoured ham, pea soup and bread, maple sugar pie and tourtière are all on the menu.

A 10-day pass adult Voyageur Pass is $22, $7 for youth aged six to 17 and free for children five and under. The pass gives you access to Voyageur Park and free or discounted admissions at all other official sites. Passes are available at Safeway. Daily admission is $13.

Festival du Voyageur will run until February 26. Voyageur Park will be closed February 21 and 22 for school programming.

← Previous: No Licence Needed to Ice Fish This Weekend Next: RCMP Use Facebook to Negotiate with Standoff Suspect →
Tags: Festival du Voyageur