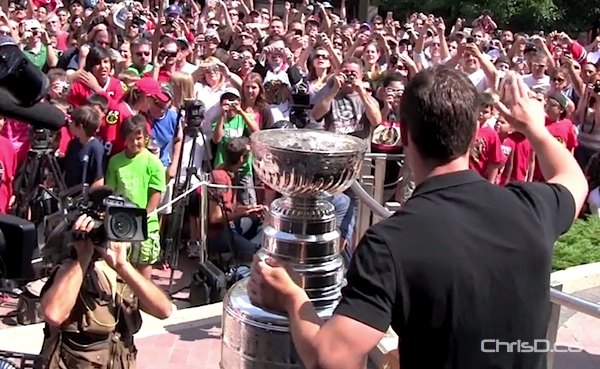 Chicago Blackhawks captain Jonathan Toews shows off the Stanley Cup during a celebration in his hometown of Winnipeg on July 10, 2010. (CHRISD.CA FILE)

The Winnipeg Jets may not be hoisting the Stanley Cup at the end of the hockey season, but Winnipeggers can still get a look at the shiny piece of hardware on Monday.

The NHL’s coveted trophy will be at the Festival du Voyageur as part of Scotiabank’s cross-Canada Celebration of Hockey tour.

“Whether you play hockey or cheer from the stands, the Stanley Cup is a cultural symbol that all Canadians can proudly identify with,” said Terry Bjornson, Scotiabank’s district vice-president for Manitoba and North Western Ontario. “The Scotiabank Celebration of Hockey program gives Canadians a chance to get close to hockey’s beloved icon.”

The trophy will be at Voyageur Park inside the Fort la Reine Tent between 11 a.m. and 3 p.m.