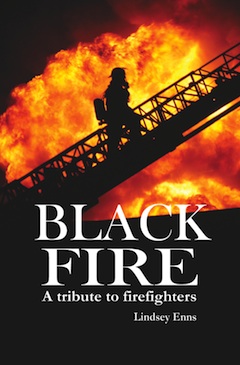 A new book revealing the stories of Winnipeg firefighters working the night two of their colleagues were killed in a flashover will soon be released.

“Black Fire” recounts the night of Sunday, February 4, 2007, when Captain Tom Nichols and Captain Harold Lessard were overcome during a routine search of a two-storey home on Gabrielle Roy Place.

The tragedy would go on to change the Winnipeg Fire Department forever and even add an amendment to the Manitoba building code to ensure newer homes have a fire-proof wall between the garage and the rest of the home.

Author Lindsey Enns is a young author and journalism major in the Creative Communications program at Red River College.

“Firefighting has always been apart of my life, my father is a Captain of the Winnipeg Fire Department and my grandfather was a District Chief,” Enns said.

After several hours of interviews with some of Winnipeg’s finest firefighters on scene that night, Black Fire will look into what happened the night of the fire and how the fire is still effecting firefighters both physically and emotionally today.

A book launch is set for Saturday, February 25 at the Fire Fighters Historical Museum, 56 Maple Street, between 3 p.m. and 5 p.m. Speakers will include some of the firefighters that were interviewed for the book and a performance by Jason Buhr, the singer and songwriter of “Unite our hearts today,” a tribute song to both Captains.

The book is $20 and can be obtained by e-mailing Lindsey at [email protected]. The proceeds from the first 500 copies sold are being donated to the Firefighters Burn Fund.

← Previous: Switchfoot Returning to Winnipeg on May 22 Next: VIDEO: Festival du Voyageur Will Keep You Busy →
Tags: Fire