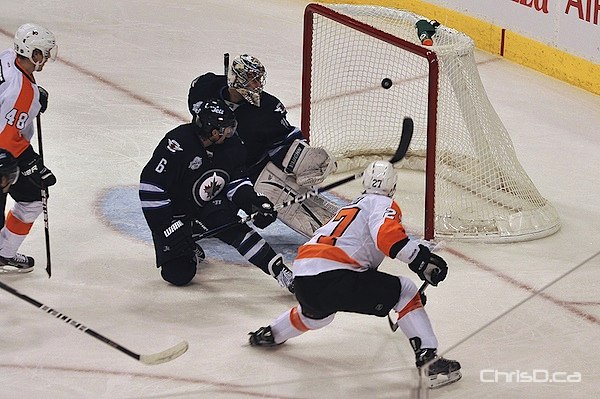 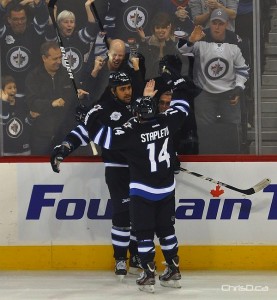 WINNIPEG — Winnipeg netminder Ondrej Pavelec put on a clinic Tuesday night, stopping 50 shots from the NHL’s highest scoring team, but it just wasn’t enough as the Philadelphia Flyers put together some late-game heroics to edge the Winnipeg Jets 5-4.

The Flyers’ Wayne Simmonds buried the regulation equalizer with a mere 9.7-seconds on the clock before Jaromir Jagr potted the game-winner with 44-seconds remaining in overtime to end Winnipeg’s three-game winning streak.

“Yes I’m disappointed,” said head coach Claude Noel. “I’m happy we got the point. Pavelec was by far the best player on the ice. And we might not have even gotten a point had it not been for him. So having said that, it was a game where we probably could’ve got two (points). Did we deserve two? I’ll let you guys be the judge of that.” 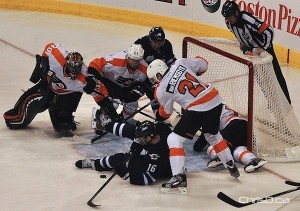 Winnipeg Jets and the Philadelphia Flyers pile up in front of the Flyers' net at MTS Centre on Tuesday. (MAURICE BRUNEAU / CHRISD.CA)

Noel stresses the importance of staying resilient and positive when losing tight games.

“You get down, you come back. We scored three power play goals, so I’m going to take some good things out of it. We had a chance to win the game. I’ve got a real unhappy group in there. They’re really disappointed.”

Philadelphia remains one of the most dangerous road teams in the league, improving their away record to a very impressive 19-9-2 on the season.

“It was one of those gutsy efforts that you look back on and might have been one of our best, toughest, wins of the year,” said Flyers head coach Peter Laviolette. “We keep fighting and keep pushing to get the two points.”

Ondrej Pavelec, who made a handful of highlight reel saves to keep the Jets in the game — and the crowd on their feet — was not available for comment following the game. Unusual. The other unusual thing; he was seen outside of the Jets dressing room, alone, lamenting the loss.

Some positives can be taken from Tuesday. Winnipeg’s scoring ability remains after some serious mid-season struggles. Andrew Ladd added a pair to his season total (18, 19), while Dustin Byfuglien (9) and Evander Kane (23) added power play markers. Forward Tim Stapleton tallied three assists. Tuesday’s 3-for-3 power play extends the Jets’ streak of consecutive man-advantage goals to five after going 2-for-2 against Colorado on Sunday.

Despite the loss in extra time, the Jets (29-26-7) gained a single point to remain on pace with the eighth-place Toronto Maple Leafs (29-24-7) who also lost in overtime Tuesday. Winnipeg’s 65 points puts them into a virtual tie with the Southeast leading Florida Panthers (27-20-11), but Florida will keep the top spot with four games in hand.

Winnipeg continues their longest homestand of the season on Thursday when they host their Southeast Division counterparts from Tampa.